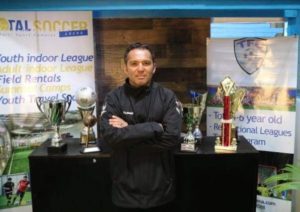 My goal is to maximize each player’s potential by working to enhance all components of their game. My personal belief is that a player’s greatest area of opportunity is technique. The excellent technique will lead to a more confident player who has more options on the field. Tactical work is then enhanced by players that can fully concentrate on the tasks rather than worry about their technical skills. With that said, I like to prioritize creativity in my players to allow them to make decisions in the game under high pressure. To do this, they must master the technique, which then correlates tactical decisions at a high pace consistently. Therefore, my training sessions are focused on dynamic and creative ways to solve pressure in tight spaces to meet the demands of the game.

Further, I spend significant time integrating my life experiences to help mold, nurture, and shape players to see the bigger picture. I want them to understand that there is more to life than the game, and that making the right choices are an integral part in their overall decisions. The choices that they make, specifically outside of the game will go a long way if their actions are positive and they lead with good intentions. These qualities are important for their future growth both on and off the field and will help bring an awareness when they tackle challenges in school, life, soccer, relationships, and work.